The cover of the eBook shows a familiar view of the Alhambra (“The Red One”) from the Mirador de San Nicholas on the parallel ridge. The walls, gardens and layout of the ninth century Moorish fortress still shine against the horizons of the Sierra Nevada.

There is much more to Granada in Andalusia than the Alhambra. There is a very fine Cathedral built on the plan of the Toledo Cathedral, over the Great Mosque. There is also the historic Albaicín district. Yet the Alhambra by its grandeur, gardens, rich decorations and visual prominence overshadows all.

This is yet another of those astonishing renovations that stand as monuments to the deep layers of Andalusian history. It was constructed first (880 C.E.) over the ruins of a Roman fortress by the Emir of Granada as a stronghold of the Ummayad Caliphate. The fortress — which encompassed the gardens and “pleasure palaces” of the Generalife — was finally ceded by its last Emir (‘Boabdil’) to the armies of Ferdinand and Isabella of Aragon and Castille in the ultimate surrender of the Reconquista in 1492.

From here, Columbus received his commission to sail West to “the Indies” so it is fitting that the last architect of the Palaces in the Alhambra was the “Holy Roman” Emperor Charles V (Charles I of Spain), the first global ruler of whom it could be said that the sun never set upon his Empire.

A PDF book with full-size images is available for download. 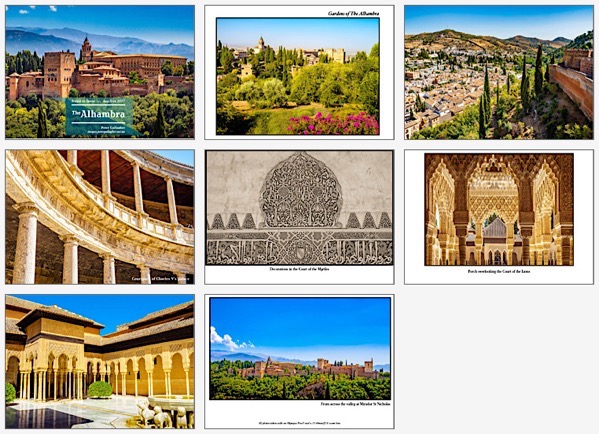